In 1973, during the advent of skateboarding culture and the rise of its prominence and acceptance as a sport of skill and coordination, Santa Cruz skateboards began releasing their own model of longboards. These newer, longer boards designed for control at high velocity instantly received great reviews by those who already had years of experience riding Santa Cruz boards. Now, forty-five years later, Santa Cruz longboards are still considered top-of-the-line products, and their legacy and reputation have only increased over time.

In this article, we will check out their wares, check out their competition, and try to weigh in on the dynamics of the longboarding community. We'll ever seen what the craze for Santa Cruz longboards is all about. 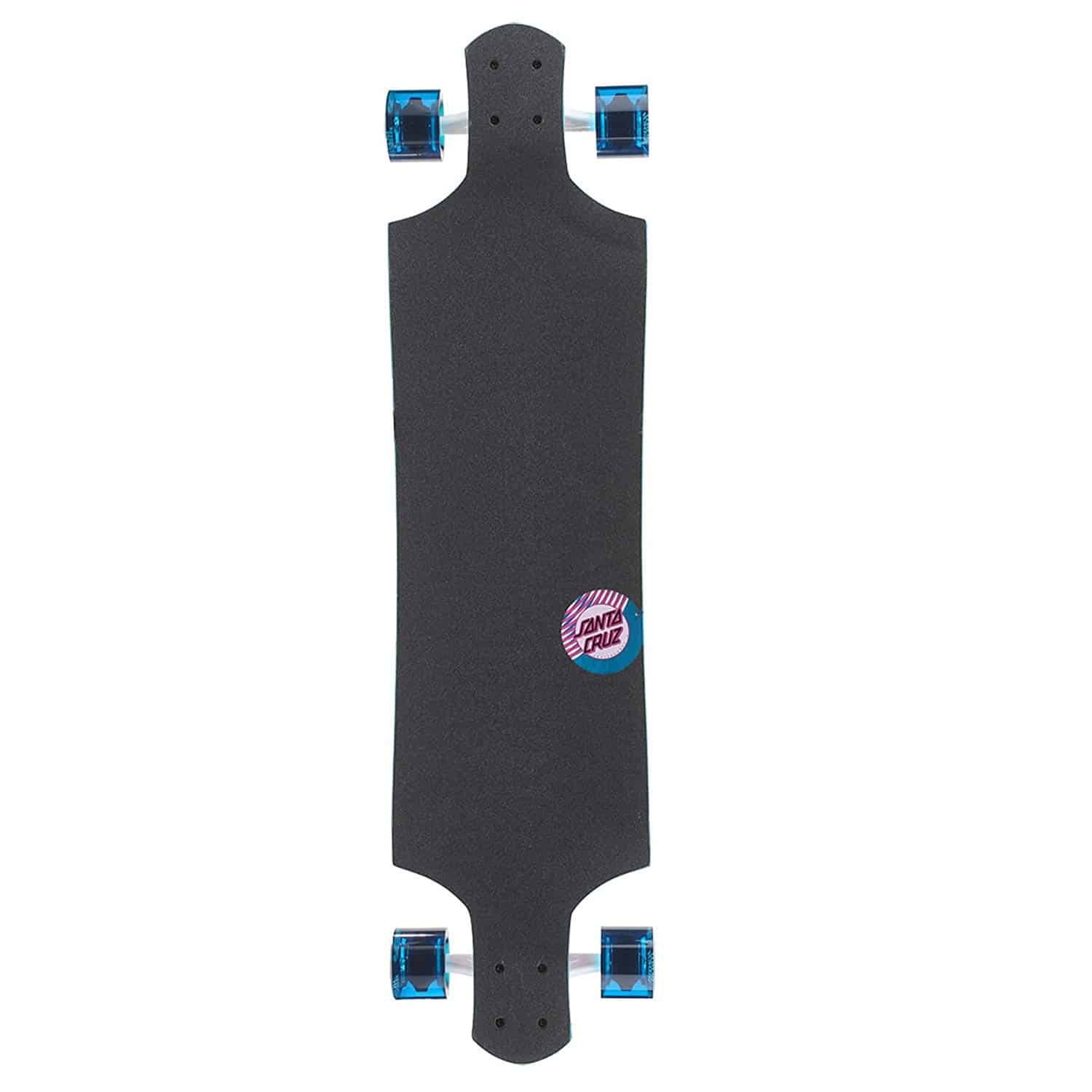 The team at Santa Cruz longboards produces a number of varieties and models that all have a certain aesthetic and functional efficiency, lending the brand's respected name. From the beginning, they maintained a standard of cutting-edge innovation in the field and was the first skating company to release a board fitted with polyurethane wheels.

Since those days, much has changed in the skating community, and the standards at Santa Cruz longboards have evolved with the sport and the progress of technology. Nowadays, Santa Cruz longboards has diversified its holdings and carries their own trucks, decks, wheels, and accessories to provide their patrons with the full package of skateboarding excellence. 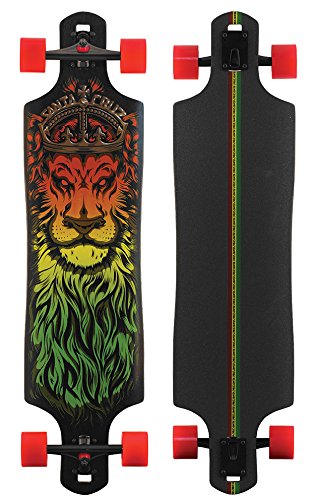 All Santa Cruz longboards are guaranteed to be high-quality boards, and the level of engineering that goes into their individual pieces contributes to this reputation. Their building material is of the highest quality, and the skill with which the boards are manufactured sets this company above its competitors. For example, certain models are made entirely out of indigenous rock maple, rather than incorporating plastic-based materials into the deck construction.

Their trucks are lightweight and aluminum in construct, making them durable, versatile, and perfect for either street riding or downhill cruising at high speeds. They resist the infamous wobbles and allow for smooth, (almost) effortless turns as the rider carves the concrete below. Lastly, we've already talked about Santa Cruz re-inventing the wheel, but we haven't touched on their ABEC 3 bearings, which—although not the best available—resist wheel bite even at high speeds. 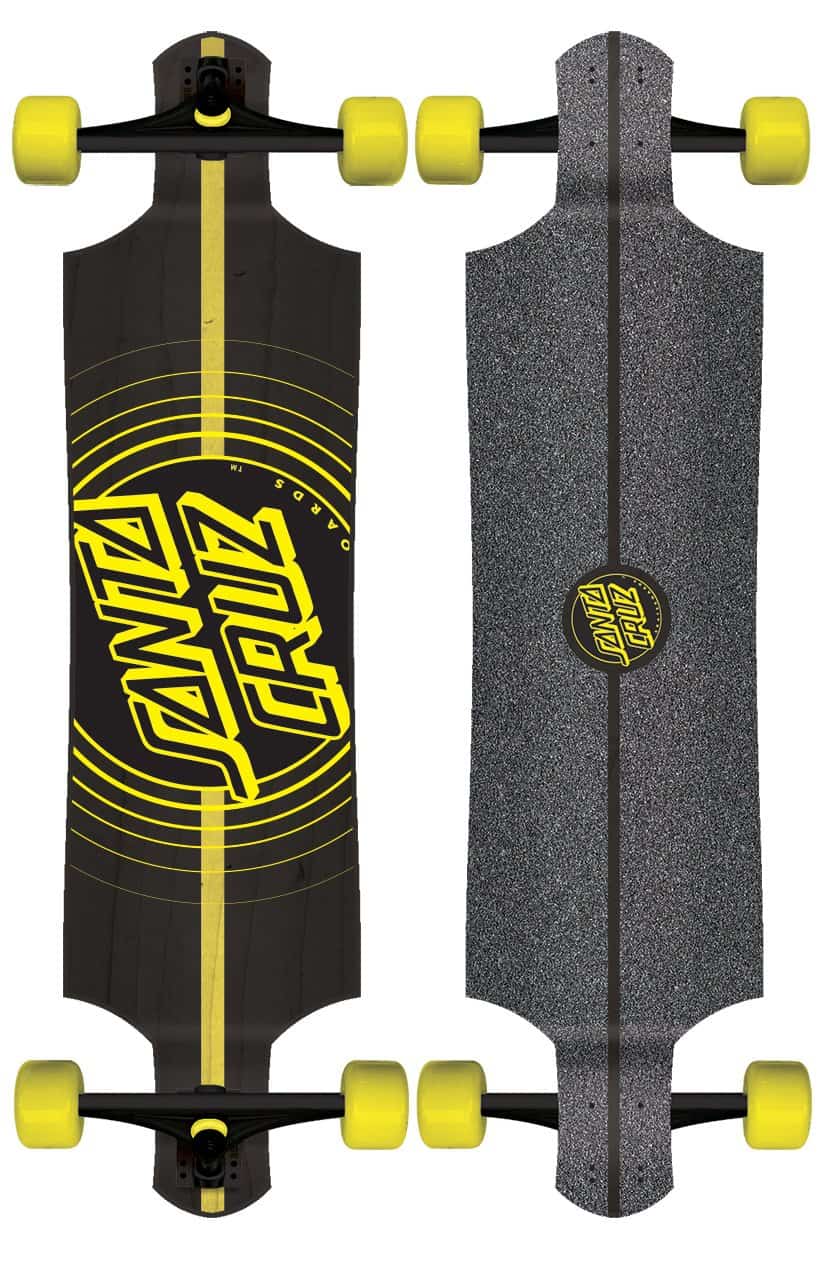 Santa Cruz longboards is a brand name that commands the respect it has earned over the years, and this respect is evidenced by the pricing of their products. Though they are slightly more expensive than your average longboard, they are also constructed with greater care and efficiency. Combine that with the fact that they are madeout of mostly North American materials in a locally situated factory, and you end up with a slightly more expensive ride.

You end up with one that will last longer, ride smoothly, and remain sensitive to your riding style well into its life. Still, though, considering the high-caliber engineering that goes into the manufacturing of a Santa Cruz longboard, the rider still gets a great deal for the investment.

Now we get down to the meat and potatoes—the comparison. We've chosen a few other companies that produce longboards to the same quality specifications as Santa Cruz, and we've compiled our findings below. For the survey, we take a look at the following:

Though Santa Cruz longboards aren't the cheapest on the market, they are made well and are still affordable when you consider what you are buying. They represent a good "middle of the road" purchase in terms of their impact on your wallet.

Santa Cruz longboards ride effortlessly and are easily kept in control for downhill longboarders. The lightweight trucks and ABEC-3s give it a smooth feel and make for easy carving, while the slightly larger wheels that the boards come with are great for pavement that is a little less than fresh. Overall, these boards hum along wonderfully and require minimal tinkering to customize for your own preferred style of shredding.

The design components of Santa Cruz longboards definitely outstrip some of its competitors by great strides. Professional artists show their true colors with a wide array of deck designs and styles that will have you cruising in style and turning heads as you fly down the levels of your local parking garage. Santa Cruz longboards are innovative with their design shapes as well as their paint jobs, and many of their selections are unique to this company.

Probably the most significant deviation from the norm when you are discussing the innovative manufacture of Santa Cruz longboards is the 100% North American rock maple decks that they offer in numerous shapes and designs. This special type of wood is durable, pliable, strong, and supple and provides the greatest riding flexibility and responsiveness on the market. Plus, this wood is sustainably harvested from North American sources; you can ride American-made boards in style.

Santa Cruz makes great components for boards of all lengths and designs, but many of these features need to be purchased separately. Their standard trucks are great for downhill and street riding, though the bushings are generic and the bearings that come with a complete board are usually just ABEC 3 bullets. They work well, but they are not the best out there. The good news is that these components are not that expensive, so the savvy rider can still upgrade their board without breaking the bank. 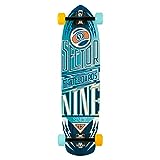 Sector 9 boards, much like their Santa Cruz counterparts, are exceeding expectations in design quality and are also really pushing the envelope on what can be achieved by longboard designers.

They are not as storied as Santa Cruz and have only been in business since 1993, but since their start, they have exploded out of the gate and have become a brand name whose recognition is synonymous with quality. Their boards have become so popular as to be almost ubiquitous, and even people who don't have the slightest clue about skateboarding culture can probably name Sector 9 as a company that manufactures quality boards.

As always, you get what you pay for. But these boards are still slightly more pricey than Santa Cruz boards. A full setup can run you as much as $$, but they are quality products that should last with care for a long time.

Sector 9 boards are notorious for their smooth ride and the stability their extra long decks offer to riders. They are so easy to ride that we think they take some of the skill out of the sport itself. Just step on, push, and plant your feet for the ride of a lifetime.

We are huge fans of Sector 9 longboards, and their reputation for making killer boards is definitely well deserved in the field: but the design aspect of their company is a little on the weak side. They have popularized the beachy feel of the sport; a trend that is made all too clear by the repetitive beach scenes and over-abundant palm trees painted onto the bottoms of their decks. That being said, if you like waves, palm trees, and bamboo, this probably won't be a problem, but for us, the overuse of coastal imagery doesn't hold a candle to a space-aged, horror punk influence of Santa Cruz designs.

Sector 9 decks have immense flexibility, and their prodigious length gives them even greater control at high speeds and helps them stay stable even when you approach the thirty miles per hour mark. Longer decks equal greater foot space, and this allows talented riders the ability to manipulate their control over the board to remarkable levels. They are predominantly bamboo boards, however, which we find does not command the same degree of flexibility and control as Santa Cruz rock maple.

These boards come with ABEC 5 bearings that create an effortless and speedy feel and also require fewer pushes to keep cruising at high speeds. They also come with 69 millimeter high performance wheels that, when paired with the ABEC 5s, create an almost soundless ride (on good pavement, of course). Bushings are also exquisite; they are 89A cone styles with delicate adjustments for all different styles of riding. 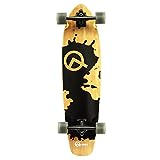 Quest longboards offer products for a wide range of riding styles from traditional cruisers to downhill bombers. If you are a longboarding enthusiast, you can certainly find something to suit your fancy at Quest, and at their prices, you can't beat the products they offer.

These prices are honestly immaculate and can't be beat anywhere. One can purchase a full Quest setup for seventy-five hard-earned dollars.

These board have a smooth and effortless ride that is not too different from the quality demonstrated by our first two companies. Like these, they are a respected brand in the snow and skate community, and they deliver on their promises with boards that come equipped with top-shelf components.

Quest boards don't come with the most remarkably original designs or the flashiest colors, but their simple aesthetic is appealing to many. Most of their boards feature one color: black design work overlaid against the natural color of their wood, which is either multi-ply rock maple or bamboo. Either way, the design aspects of Quest boards bring the simplicity that Sector 9 tries to achieve without the reliance on basic beach motif designs. Still, for those who enjoy flashy color schemes, Quest might leave you wanting more.

Multi-ply rock maple makes for even more durability and performance than any other board on this list! Plus, as an added bonus, Quest boards make even the longest Sector 9 selection seem like a cruiser. These decks allow for stylish riding and a sleek look and will definitely hold up to the test of time and hard ridings.

For the most part, the components that come standard with Quest boards are top of the line in terms of design and performance. Some of their boards come with a narrow truck setup, clocking in at only six inches from tip to tip. For more advanced riders, this stance may not affect ride styles or versatility, but beginners may have a harder time adjusting to the narrow set of the wheels.

They do, however, come with ABEC 7s which are extremely high-quality bearings. But still, bearings aren't that pricy, and the speeds you can achieve with ABEC 7s will, except for talented riders, be precluded by the loss of control caused by narrow trucks. 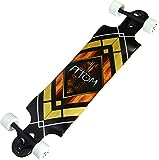 These boards are slightly more expensive than Quests and slightly cheaper than Santa Cruzes or Sectors. Overall, a full setup will run you about $$.

The ride from these boards is smooth enough, and the average longboarder will have no problem with its functionality. We found the Atom boards to be a little louder than their competitors, and they have a wider turning radius that is partly due to the longer length decks that they sport.

The innovators at Atom longboards are responsible for the drop deck! That means they cruise around wonderfully, and they look unique, cool, and contemporary, but there is a more limited range of foot stances for the rider to adopt.

Did we say "drop deck" yet? Their lines come with stunning visual art and design, and their durability has withstood numerous sessions and the passage of time. They are definitely innovating in terms of deck construction.

Though most of their boards come with sub-standard bearings that many riders will recommend switching out, they are also the only company on this list that offers a board that comes complete with lubricated ABEC 9s.

In conclusion, though all of the boards on this list are great for riders of all skill levels and degrees of experience, we are happy to recommend Santa Cruz boards to the beginner and advanced riders. Their name has rung true for forty years, and in that time, they have mastered the art of skateboard manufacturing. Though other boards might be cheaper, they do not have the same durability and integrity as those coming from Santa Cruz longboards.